Even though it wasn’t the first time she had been to PFW, she couldn’t restrain the fascination she felt. It was almost like an embellished door from her soul opened and she let herself taken by the hand of destiny. She felt protected and enlightened.

‘Haute Couture Week’ she whispered to herself, as she contemplated on how well the powdery pink Ladurée macarons were matching her Jimmy Choo glittered tulle suede pumps and the Isabel Marant crystal-embellished velvet mini dress.

She finally decided to leave the comfort of the 19th century theme decorated tea salon, after gently savoring the last bite of her rose flavored Ispahan pastry. To be honest, a little bit of remorse captured her after she indulged in so many sweets. But this was just because she briefly caught the judgy glances of some Renaissance chubby angels painted on the ceiling, so she quickly dismissed that thought.

The cold, crisp air of winter was mixing in with the sweet warmth of the pastry shop, enticing her senses and pleasing her heart.

She always had an eye for colors and little aesthetic pleasures and she found herself swept away again by the never ending dreams of shoes, embroidery and dresses. After all, how could she not be charmed by such marvels when everywhere around her she could find traces of sequins and glitter from the memories of the previous day’s Haute Couture shows.

But now, it was the start of the Day3 of PFW Haute Couture SS’19! 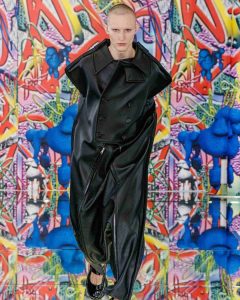 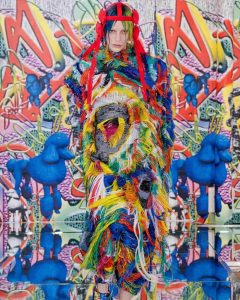 The third day of the PFW Haute Couture Spring/Summer’19 started with a show signed by Jean Paul Gaultier for Maison Margiela. This collection was a surrealist description of androgyny combined with street style transformed into haute couture. The graffiti painted wall behind the models and the entire ceiling displayed royal blue poodles that were reflecting on the mirror covered catwalk.

The designer revealed that the source of inspiration for his ‘Artisanal’ collection was the decadent world of today’s age which will eventually turn to restraint for salvation.

Net jackets, cotton and jacquard skirts, pleated organza and patent leather colorful shoes were some of the main focus points of the show.

For many years now, the Haute Couture section has been associated with Elie Saab. His designs, beaming of artistry and exuding of glamour have become a landmark in terms of refinement, sophistication and expectations when it comes to such a high-end portion of a fashion show.

This year’s collection, ‘Vida Paraiso’, was inspired by the underwater flora of the Caribbean Sea. With such a tropical choice in mind, the designer brought the reinterpretation of natural treasures of the sea into a mundane perspective.

The models were summoning the magic and irresistible charms of the mythical mermaid creatures. With such a rich flora and fauna to choose from as a source of inspiration, you can imagine that the catwalk was filled with all kinds of unique motifs. A seafoam colored dress with slightly pleated organza falling off-the-shoulder just to come back together in what it looked like to resemble a marine node, left the audience dazzled by its own voluminous skirt. The waist was tastefully accentuated by a liquefying sequined coral embroidery. It was almost like you could feel the underwater air bubbles around you.

The show continued to display hand-sewn beads and crystals onto spring suits, taffeta and organza dresses. As the ‘mermaids’ continued their terrestrial journey through the interested and analytical glances of the guests, a short golden sequined jumpsuit followed the fluid game of sea patterns, covering a transparent tulle.  To top off everything, a turquoise, almost liquid, long duster coat swept everything away, with the same splendor and magnificence as of an enraged wave that crashes on the golden sand shore.

Imagine yourself in the middle of a torrid summer day, as your are breathing in the salty air mixed in with the quartz transformed sand, the breeze caressing the top of your cheeks, your ears, the back of your neck and you letting yourself dive into the paradise land of the unknown blue lagoon.

This Haute Couture SS’19 collection was just the splash of light-grabbing sequins that everybody needed. 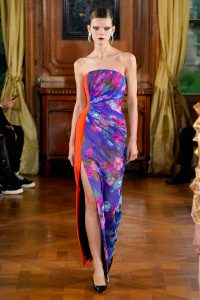 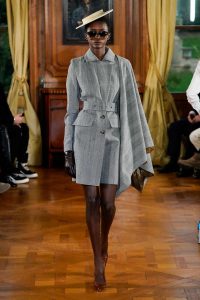 Sustainable Couture was the heart of the matter for Ronald Van Der Kamp. Understanding the emerging ecological issues of our planet and wanting to implement new ethics into this new age fashion, the designer opted for a modern approach for his Haute Couture SS’19 collection. Held at the headquarters of the Netherlands Embassy in Paris, he raised the problem of sustainability in fashion through recycling.

The collection varied from elegant dresses and skirts to Haute Couture sportswear. A contrasting tangerine orange stripe of color placed on the right lateral side, accentuated the deep violet color of a floral dress. Flare pleated denim pants were carefully paired with a washed out denim blazer suit, a matching tie and a black shirt, creating a modern boss lady look.

Whether we are talking about luxury fashion that will last longer or company strategies that lead to environmentally friendly textiles, sustainability in fashion is an important subject that should not be taken lightheartedly.

Haute Couture is a demonstration of creativity, imagination and playful statements of bravery.

Super pointy shoulders (reminiscing of the famous Madonna cone bra, made also by Jean Paul Gaultier-firstly for his 1982 collection), voluminous jacquard bows, sky-blue crinoline dress worn by Coco Rocha and matte colorful tights, the Haute Couture SS’19 collection was a lively fantasy. The ever present motifs were pleated textiles, varying from over the knee high pleated boots, to pleated organza and laser-cut pleated tulle and even to colorful wigs styled with crimping plates to resemble a pleated material.

A special appearance on the catwalk was made by the ‘new burlesque’ dancer, Dita Von Teese. Her fair skin and dark black hair were complemented by a sheer tulle dress framed in by half sphere tall shoulders that, to me, simulated the wings of a dragonfly. Peaking through the transparent tulle were the garter belt and stockings, adding to her already steamy persona. 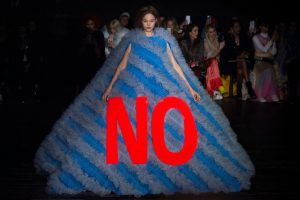 ‘F* this, I’m going to Paris’ I guess is everyone’s mantra these days!

On a mountain of light grey and blue tulle dress, a big orange ‘NO’ statement was claiming its ruling. Ironically speaking, ‘No Photos Please’ (in a room full of photographers) and ‘Less is More’ (placed on a ridiculously voluminous pink tulle dress) were very entertaining. ‘Amsterdam’ over a marijuana leaf sewn on a green dress was also a rather obvious statement.

‘Trust me, I am a liar’, ‘Sorry I’m late, I didn’t want to come’, ‘I am not shy, I just don’t like you’, ‘I am my own muse’ were just some of the fashion statements made by the two designers.

It was certainly a collection about freedom of speech, ideas and owning your thoughts, without giving a single care in the world about somebody else’s perception over who you are.

The designer found his inspiration in the deep sea, through rays of light caught by the surface clear water just to release it into the marine flora and fauna. From a metallic pleated baby blue and powdery pink dress to a Maya blue sequined short jumpsuit with silk layers of organza forming an open long skirt, the attention to details was exquisite.

Turquoise green ruffled organza imitated the hypnotic slow movements of algaes, while hand-sewn beads, crystals and cup sequins created corals on a transparent tulle gown. It was as if the flora and fauna was summoning back their adepts in an intricate Haute Couture SS’19 fairytale.

An ivory white feathered top with a long train creates quite the Haute Couture SS’19 vision if you were to ask me, especially if paired with slightly flared iridescent bright strawberry pink taffeta pants.

Naomi Campbell, Kaia Gerber and Natalia Vodianova were some of the big names walking for Maison Valentino.

It was a floral themed collection, with designs transitioning from ruffled tulle dresses to blossomed gardens pictured on an off-the-shoulder jumpsuit, three leveled taffeta macaroon-cream-white dress, beaded and sequined floral motifs tights, to matching petals attached around the models’ eyes. 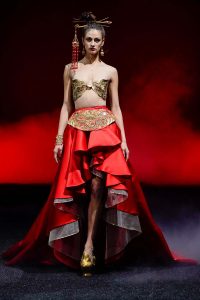 Palais de Tokyo was carefully transformed into an ‘East Palace’ for this Guo Pei Haute Couture SS’19 collection. The Asian couturier brought to life, yet again, another oriental inspired fantasy world. The designer’s intentions were to portray, in a gentle manner, a ‘Taoist mystery’ and the imperial luxury, in an attempt to merge the ‘Eastern and Western influences’.

Throughout the entire show the symbols of the Asian culture were prevalently present, as admiral blue 3D padded embroidery was captured by an impeccably gold-wiring embroidered royal gold beaded dragon.

The designer’s extraordinaire craftsmanship was proved through countless encrusted, dazzling and shimmering beads, crystals and stones, all very artistically placed on rhomb silver tops, on floor length open belle shaped sleeves and on all of the other accessories that completed the theatrical picture.

The Balmain Haute Couture SS’19 was hands down an imaginative roller-coaster of geometric shapes, a young designer’s dream brought to life through his own creative genius. Olivier Rousteing built a new world based on the positive notes of the former one, in a way only fitted for an Haute Couture show. From definitively intriguing sharp angles, to mother-of-pearl spheres worn as skirts, cuff bracelets and as bags with the metallic ‘B’ Balmain logo on them, this collection was an allegorical showcase of mastery in the world of fashion.

**All image rights belong to their respective owners**

We use cookies to ensure that we give you the best experience on our website. If you continue to use this site we will asume that you are happy with it. Accept Read More
Cookie Policy
Necessary Always Enabled